I often get questions about coconut oil: What brand should I buy? What should I look for in a label? Should it be refrigerated? It looks pretty solid at room temperature, is that okay? This post is an attempt to answer some of these great questions! 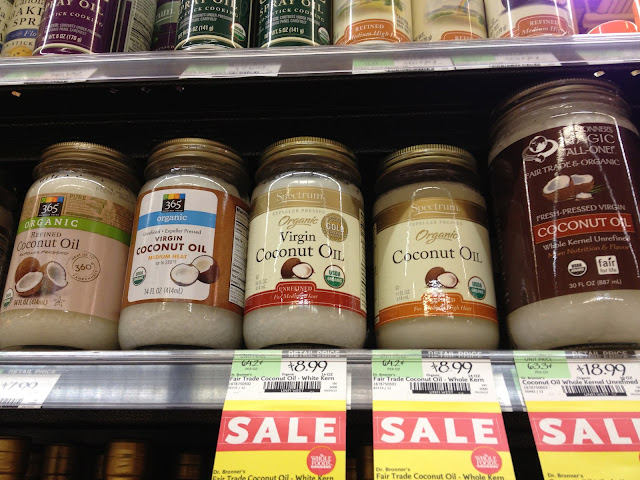 The first concern of those who are new to the World of coconut oil is typically it’s appearance! In fact, I receive many calls from the grocery store, or as soon as people get home from the store, asking if they bought the right thing:-) It looks hard to work with, quite different from the vegetable oils many have been used to, and a lot like a saturated (solid at room temp) fat that we have been told to avoid in the past. All understandable reasons for alarm. 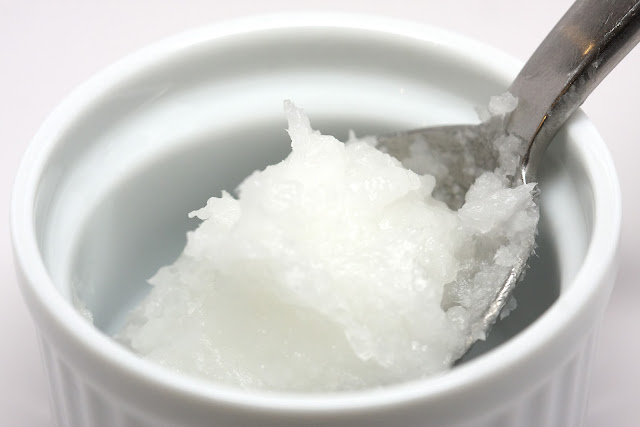 But, rest assured! Yes, coconut oil is a “waxy” or “pasty” looking substance below about 76 degrees F and slightly “gooier”,  “creamier” or “liquid-like” just above. Despite such fluctuation in appearance, this STABLE oil can withstand such changes with great ease. This stability makes it an awesome cooking oil because it holds up to higher heats than many liquid oils, such as olive or canola, and is at much less risk of forming free-radicals or going rancid.

So, why mess with this purported “good fat”? Let’s consider…

Coconut oil is made up primarily of medium-chain fatty acids that are easily digested and converted to energy in the body.

Coconut oil contains something special called lauric acid. It’s been said that it contains the most lauric acid of any natural substance. Lauric acid appears to have incredible health benefits including anti-viral, antibacterial, anti-microbial and anti-fungal properties. Such properties are very helpful for good digestion and overall immunity.

Coconut oil is even a great natural skin and hair care product! 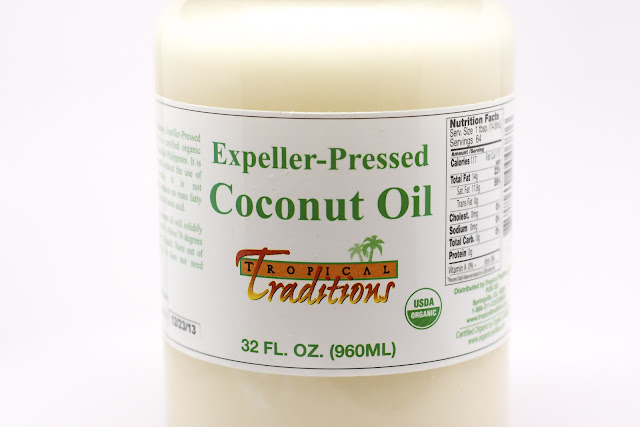 “But, what kind do I buy? What are the differences?”

Let’s break down the label lingo:

If a company claims “organic” or you see the label “USDA Organic” it means that the coconuts that were used to make the oil were grown without the use of pesticides. Now, ideally this is great. But, it isn’t to say that a brand without the seal of approval is a bad option. For example, Tropical Traditions has one form of coconut oil that claims to use coconuts from a remote area where coconuts are responsibly grown without pesticide usage, but local farmers aren’t concerned with the expense and process of attaining the official organic seal. Sometimes a little reading or leg work needs to be done to learn more about where your food comes from beyond reading a label.

Refined coconut oil is in fact more “refined” or processed than unrefined. It can hold up to slightly higher temperatures during cooking, has less “coconut” taste and smell and can be good for cooking dishes where you don’t want a competing coconut flavor. To me it almost tastes more buttery. The downside is that you don’t get all the same health benefits of a quality “unrefined” oil. It’s still a good source of stable fat (and can be more cost-effective), but it loses some other benefits.

If you do choose a “refined” coconut oil for certain purposes, than pay attention to HOW it’s processed. There are different techniques and it’s important to choose a brand who uses a chemical-free process, or “physical refining” without the use of chemical solvent extracts. Most commercial grade coconut oils are made from dried coconut and must be chemically refined, bleached, and deodorized (RBD) to make it safe to eat – I would avoid such products.

“Unrefined” coconut oil is made from fresh, raw, coconut meat. There are no added chemicals and high-heat is not used to further refine the oil. With this, you also experience more coconut flavor. “Unrefined” oil should offer all the health benefits coconut contains.

Unlike with olive oil, there aren’t any defining standards with labeling coconut oil either “virgin” or “extra-virgin”. There is no set difference between the two terms and therefore, not something to use as a distinguishing factor. Either term refers to an “unrefined” coconut oil.

These terms are used to describe the methods of oil extraction from the meat of the coconut. They all should be chemical-free “acceptable” methods. They vary based on whether friction, some heat, or spinning/gravity are used to get the job done. Based on the technique, you can get a stronger or more delicate flavor and texture in your coconut oil. “Centrifuged” appears to be the most delicate (an example would be Tropical Tradition’s ‘Gold Label Virgin’) and “expeller-pressed” has potentially the strongest flavor. Choosing an option depends partly on your own taste preferences.

“Raw” coconut oil means that no heating or chemical treatment is used to extract the oil from the coconut. 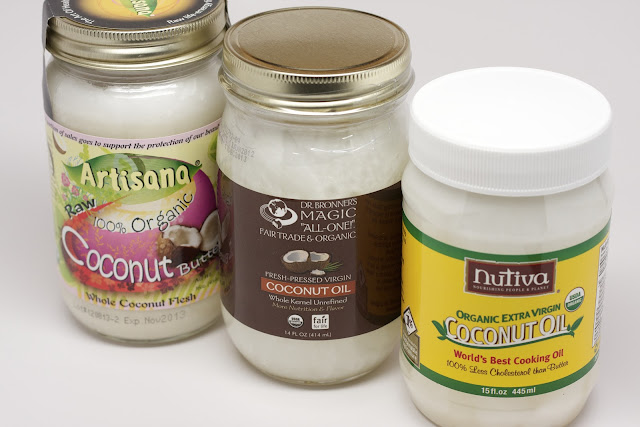 Some of my favorite brands include:

• Tropical Traditions
• Dr. Bronner’s
• Artisana (for coconut butter)
• Nutiva
• Wilderness Family Naturals
I look for organic, unrefined, and virgin (or extra-virgin) on the label and then I like to investigate further on how the product has been processed. Some of these brands can be found in your local health food store or online. You can often save a little money if you buy in bulk or watch for special deals. Because coconut oil is very stable it will last at least 6 months in a cool, dry place. There’s no need to refrigerate. It can be safely left on your counter or in your pantry.

What can I do with coconut oil?

Coconut oil can be used as a cooking oil (sautéing, coating baked or roasted meats and veggies), added to “baked” goods, used for raw food desserts, or added to your morning cup of coffee or tea. It can also be used in dips, sauces and soups. For purposes where you need to use your coconut oil in liquid form, it is best to melt it in a double boiler. You may also set a glass bowl over a small saucepan that has an inch of water on the bottom, add the coconut oil to the glass bowl, gently heat and make your own double boiler. Melting coconut oil in the microwave is convenient, but it can lose some of it’s beneficial health properties.

There’s also another product that is similar to coconut oil: Coconut Butter! But, what is it and what would one use it for?

Coconut butter includes the flesh, or meat, of the coconut along with the oil. It’s usually found near the nut butters in your local health food store and can often be used in a similar fashion. It has a delicious, rich, creamy taste and texture and can be added to smoothies, stews, “baked” paleo treats or topped on apple slices. It’s another good option for those of you looking to increase your quality dietary fat intake.

Experiment with and enjoy quality coconut oil and share your favorite uses or brands in the comments section below!

Hi, I’m Shannon and my mission is to help you and your family discover a life of wellness through food and healthy habits. As a Nutritionist, and founder of Primal Peak, I share current content, recipes, and programs to guide you towards vitality and peak performance.

You Can Buy My Book

I am the owner of Primal Peak, a “nutrition specialist” at Copper Moose Farm, and a Board Member for a local non-profit, EATS (Eat Awesome Things at School). In addition to this, I love to help mothers feed their families Real Food.

Learn More About Me!

We’ve got great recipes, primal diet ideas, and a wealth of nutritional info waiting for you.